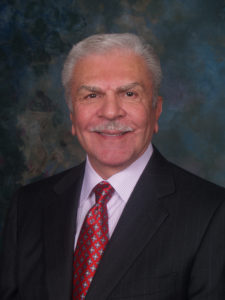 A San Antonio native, Charles T. Barrett, Jr. grew up in the Prospect Hill neighborhood. His father and grandparents had migrated to Texas from Mexico during the mass exodus resulting from the Mexican Revolution in 1914. The 2012 PBS documentary “The Children of the Revolución” details some of his family’s history.

Barrett’s first paid job at 10 years old was in his neighborhood: delivering tortillas to smaller grocery stores. He also held a variety of jobs at Hendricks Tire Company, which may have first stimulated his interest in things automotive.

Barrett graduated from Jefferson High School and in 1962 he earned a BBA in accounting from St. Mary’s University. He joined the Coast Guard Reserves, where he acquired hands-on leadership skills. He retired in 1990 with the rank of Commander.  During his career he commanded Coast Guard Units in San Antonio and Corpus Christi.

As a CPA, Barrett worked until 1973 at the San Antonio accounting firm of Holmes, Raquet, Harris and Shaw as a partner. He left to found Charles Barrett & Co, which he managed until 1986.

By 1989, Barrett had moved on to serve as President and Chief Executive Officer of Express Cash International Corp., which was eventually acquired by Cash America. After the buyout, Barrett entered the automotive industry and purchased a Jaguar dealership.

Noting the lucrative potential of this transaction, in 1993 Barrett secured a business loan that enabled him to acquire and rebrand the dealership as Barrett Jaguar. Since then, the Jaguar dealership has won the “Pride of Jaguar” award 12 times in recognition of overall quality granted to the top 12 out of 175 U.S. dealerships. Over the years, Barrett’s automotive empire has expanded to encompass Maserati, Saab, Alfa Romeo, Mitsubishi, and Land Rover, with several of these dealerships having earned stellar distinctions.

Barrett believes strongly in giving back to the community that has nurtured him. As an alumnus, Board Chair, and Trustee of St. Mary’s University, Barrett and his wife Melissa spearheaded the building campaign in 2006 to erect the Barrett Memorial Bell Tower, a campus focal point that was dedicated in 2007. The Barretts continue to support the university, having recently pledged $1,000,000 to create The Charles & Melissa Barrett Peer Ministry Program, which aims to strengthen and enrich the faith of students living on campus.

Barrett is personally recognized by the Texas House of Representatives as an outstanding Texan for significant and lifelong contributions to the city of San Antonio. His businesses consistently rank at the top for Hispanic-owned and local employment honors.

Current Texas’ 120th House District State Representative Barbara Gervin-Hawkins is a tireless advocate for youth education. She’s had her boots on the ground, with Certifications as both a principal and a middle school math teacher. But Gervin-Hawkins’ more impactful role has been as a business leader in the fields of education and service to disadvantaged youth and adults.

Gervin-Hawkins began her professional life in Detroit at Ford Motor Co. with an accounting degree from Eastern Michigan University. She relocated to San Antonio in 1981 to be the personal accountant for her older brother George “Iceman” Gervin — retired Spurs and NBA Hall of Fame basketball player. Ten years later, the siblings co-founded a 501(c)(3) nonprofit, the George Gervin Youth Center, Inc. Barbara is currently Special Projects Coordinator at this umbrella organization. She also served as Superintendent and CEO of George Gervin Academy (GGA), a free public charter school, which grew in 1995 to serve students in pre-kindergarten through twelfth grade. To date more than 1,800 high school drop outs have attained diplomas.

With 11 locations, including three dedicated to pre-K and two targeting grades 6-8, GGA comprehensively addresses root causes of poverty and addiction through affiliated programs:

Gervin-Hawkins’ political career began in the City of San Antonio District 2 when she served as Zoning Commissioner. She has been active on numerous area boards including the Greater San Antonio Chamber of Commerce, Rotary International, the Ella Austin Community Center, and the Casey Family Program for homeless youth. She is also a member of the San Antonio Women’s Hall of Fame, and Who’s Who of San Antonio. Gervin-Hawkins was elected to the Texas House in 2016. During the 85th and 86th legislative session, she became “Freshman of the Year” of the Texas Legislative Black Caucus, and worked as its Second Vice-Chair. She serves on committees involved with redistricting; criminal jurisprudence; culture, recreation, and tourism; and rules and resolutions. 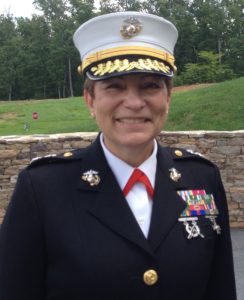 Major General Angela Salinas, U.S. Marine Corps (Retired), currently serves as CEO of Girl Scouts of Southwest Texas, a position she’s held since July of 2015. She manages operations for a business with a $6.8 million budget serving 20,000 Girl Scouts and adult leaders in a 21-county area.

Enlisting in May 1974 and earning her commission in December 1977, Salinas’ career with the Marines saw her achieve a series of firsts. In June 1989, Salinas became the first female to command a Marine Corps recruiting station; four years later, in 1992, Salinas was assigned as a combat service support ground monitor, another first for a woman Marine. In August of 1999 she became the first woman to serve as a plans officer for a major combatant command and in the spring of 2001, Salinas became a recruiting district commanding officer, again breaking a glass ceiling for women.

In August 2006 she became the first Latina promoted to the general officer ranks in the 230-year history of the Marine Corps and the first woman to command the Marine Corps Recruit Depot/Western Recruiting Region in San Diego. When she retired in September of 2013, she was the senior ranking woman and Hispanic in the Corps.

Salinas holds many other distinguished recognitions, both local and national. She is a 2018 San Antonio Chamber of Commerce Tribute to Women Business Leaders Hope Awardee; received the 2018 San Antonio Business Journal Women’s Leadership Award; and 2018 American Latino Influencer Valor Award. In 2016 Salinas was inducted into the San Antonio Women’s Hall of Fame; also that year she joined the Hispanic Women in Leadership Hall of Fame and received the TAMACC Woman of Distinction and Hope Hispanic Heritage award.

Salinas was named an inaugural Top Latino Leader by the National Diversity Council and was awarded the U.S. Hispanic Leadership Institute’s Lifetime Achievement Award; the Hispanic Heritage of Texas “Estrellas de Texas”; Lifetime Achievement awards from Latina Style Magazine and North Star; the Congressional Hispanic Caucus Leadership Award; and Women’s International Center’s Living Legacy Award. She was named one of 15 Phenomenal Women by Latina Magazine and one of six Power Latinas by Vivala.com.

Salinas was born in Alice, Texas, the youngest of five children of native Texan parents who were descendants of one of the first families to receive land from Spain in 1767. Salinas is also an athlete, having played basketball and softball in high school and college. A 1976 graduate of Dominican College of California, she was named a Distinguished Graduate in 2016 and awarded an Honorary Doctorate.